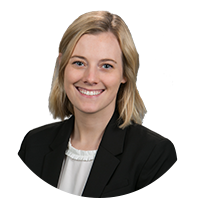 Claire Berg was born in Shreveport, Louisiana and admitted to the Louisiana Bar in 2016. Claire attended Louisiana State University, where she obtained a Bachelor of Science in Psychology. Claire received a Juris Doctor and a Graduate Diploma in Comparative Law from the Paul M. Hebert Law Center at Louisiana State University. While in law school, she participated in the Flory Mock Trial Competition and received the Chancellor’s Scholar Award.