Personal Injury, on behalf of Plaintiffs 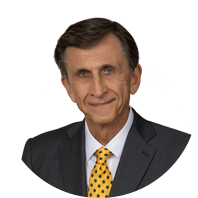 95% of Practice Devoted to Litigation

Robert J. David was born in New Roads, Louisiana in August 1943. He graduated from St. Joseph’s High School and attended LSU and SLU, earning a B.A. degree in 1966. In 1969 he received his Juris Doctor degree from Loyola Law School, where he served on the Loyola Law Review.

Representing patients and their families in medical malpractice cases is the principal focus of Robert’s practice. These cases have involved all aspects of medical negligence, including, but not limited to, birth trauma, delayed diagnosis, retained object/sponge/instrument, improper procedure, improper supervision, nursing/staff negligence and wrongful death. Robert has tried many cases to juries and judges across Louisiana.

Beginning his career with Gainsburgh, Benjamin law firm as a law clerk in 1968, Robert joined the firm as an associate in 1969 and practices with the same firm today.

He has been named to Woodward/White’s “The Best Lawyers in America,” for twenty-two consecutive years. He is listed in “Louisiana Super Lawyers,” published by “Law and Politics,” in the specialty of medical malpractice and was named by Super Lawyers as one of the “Top Ten Attorneys in Louisiana.” He has, for many years, been listed in Who’s Who in America and Who’s Who in American Law, and for twenty-five consecutive years had been named as a “Best Lawyer in America”.

In 1989 he was appointed to the Medical/Legal Interprofessional Committee, a Joint Committee of the Louisiana State Medical Society and Louisiana State Bar Association, having served as Attorney Chairperson from 1991 – 1994.

Robert was bestowed with the New Orleans Bar Association’s Arceneaux Professionalism Award and he was presented with the President’s Award from the Louisiana Association for Justice.

In addition to his professional commitments, Robert was a reader/recorder for the Louisiana Blind and Handicapped. From 1995-2000 he was on Holy Cross High School’s Board of Directors, and he served as President of Arden Cahill Academy’s Parent Teacher League from 1978-1979.

Robert and his wife Stella married in January 1967, they have two sons, and are proud grandparents. Robert, Jr. is an attorney practicing in the Juneau David firm, Lafayette, Louisiana, and Richard is a manager of the Structural Heart Division of Medtronics in Little Rock, Arkansas.