Breach of Contract: What Types of Damages are Available? 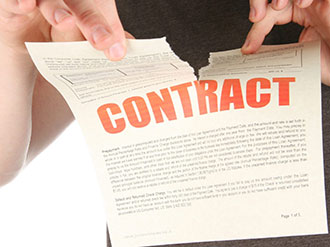 When a contract is signed, most people have the best intentions to hold up their end of the deal. But things come up, and there are times when one or more of the patients doesn’t stick with these negotiated terms.

How should you handle the situation if you signed a written legal document and the deal isn’t going as planned? These terms and conditions are legally binding once there are signatures on the final draft. “Breach of contract” refers to the situation where someone violates the terms in an agreement.

Examples of a Breach of Contract

Usually, a breach of contract falls into one of these categories:

Here are a few common examples of a breach of contract:

There are various situations where a breach of contract can occur. It is helpful to have an attorney help you navigate potential issues relating to your contract. Then you can seek damages or repair if you have a case.

Before you pursue a breach of contract claim, you must establish that a contract was in place and the other party didn’t follow the agreement. It’s your responsibility to present the evidence against the person you are taking to court, with the goal of showing the judge how the other party failed to meet the contract requirements.

Hiring a lawyer is a critical decision that you will make at this time. Your contract attorney will help you evaluate the contract’s validity, negotiate with the other party, and help you decide on the best course of action in the future.

Tapping into the expertise of a knowledgeable attorney is a critical step to protect your interests. Your lawyer can help you evaluate a variety of legal issues relating to the contract, such as:

Examples of Damages for a Breach of Contract

Through the court proceedings, the judge will determine how substantial the breach was to decide on the damages and amount offered to the plaintiff.

Should You Seek Damages from a Breach of Contract?

Every situation is unique, which is why you must talk to an attorney to determine if you can receive damages from a breach of contract. The lawyer will help you verify the case. Then you will need to specify the damages you are seeking when filing the complaint. While these damage requests are filed initially, it’s up to the court to decide on the specific damages that are granted (if any damages are offered).

When you are involved in a contract dispute, a lawyer is a valuable resource to protect your interests. Talk to a business lawyer for a professional review of the contract and circumstances. Together, we will determine your options for recourse, then file a claim and prepare a defense.

It’s helpful to have a lawyer available to answer your questions and guide your decisions. Available legal services include everything from professional advice to representation in court if needed. If you would like to learn more, then talk to our team at Gainsburgh, Benjamin, David, Meunier & Warshauer, L.L.C. Call at your convenience to schedule a consultation: (504) 522-2304.