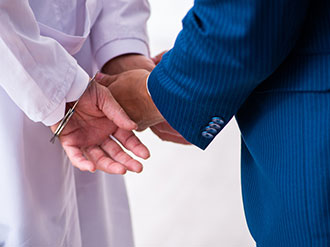 A woman in a county outside Louisiana has reportedly been working two jobs to make ends meet since a devastating medical error caused her husband to become permanently disabled. The 52-year-old man had worked as a press foreman for approximately 15 years before hospital negligence caused him to suffer serious, permanent injuries. Jurors recently awarded him nearly $9 million, the largest medical malpractice verdict in the county’s history.

The man had initially undergone surgery for a colovesical fistula, a condition involving an abnormal connection between the colon and the urinary bladder. A month later, a surgeon followed up the procedure by removing 6 inches of the man’s colon and stapling the rest of it back together. After that, the man was reportedly in and out of the hospital several times because he never seemed to fully recover from the follow-up surgery.

At one point, he went to the emergency room with severe abdominal pain. However, staff did not inform his surgeon of his condition until nearly 12 hours later. Because the of the delay and subsequent complications including septic shock, the man ultimately lost both his legs below the knee. He has also had to have a thumb and finger amputated, all of which may have been prevented had his surgeon been contacted in time.

Although the surgeon was listed as one of the defendants in the medical malpractice claim filed after the incident, he was found not liable. The Butler County Health System was found 100 percent liable for hospital negligence. While one would hope that such tragedies are rare, it is possible that someone in Louisiana could face similar problems. Under such circumstances, it would be advisable to seek immediate assistance from an experienced personal injury attorney.