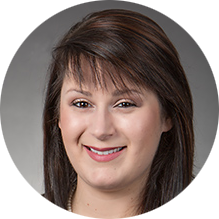 Rachel Naquin joined Gainsburgh Benjamin as an associate attorney in 2017. She is admitted to practice before all Louisiana state and federal courts, including the United States Court of Appeals for the Fifth Circuit.

Rachel earned her Juris Doctor at Penn State Law, where she was a member of the Civil Rights Appellate Clinic. Through her time with the Clinic, she worked on three cases before the Supreme Court of the United States. While in law school, Rachel competed for Penn State Law on the ABA National Appellate Advocacy Moot Court Team and the AAJ Trial Advocacy Team. She received Penn State Law’s Unsung Hero Award for her commitment to organizing the law school’s intramural mock trial competition for first-year students. Rachel also served as a Senior Editor for the Penn State Law Review, and she is a member of Phi Delta Phi Legal Honor Society.

Since its inception in 2017, Rachel has participated in and helped organize Justice Camp, an academic program designed to impart civics education and advocacy skills that prepare local high school students for college, careers, and civic engagement, sponsored by the New Orleans Chapter of the Federal Bar Association at the United States District Court for the Eastern District of Louisiana.

Outside the practice of law, Rachel enjoys watching the Nittany Lions take the field every Saturday during college football season.